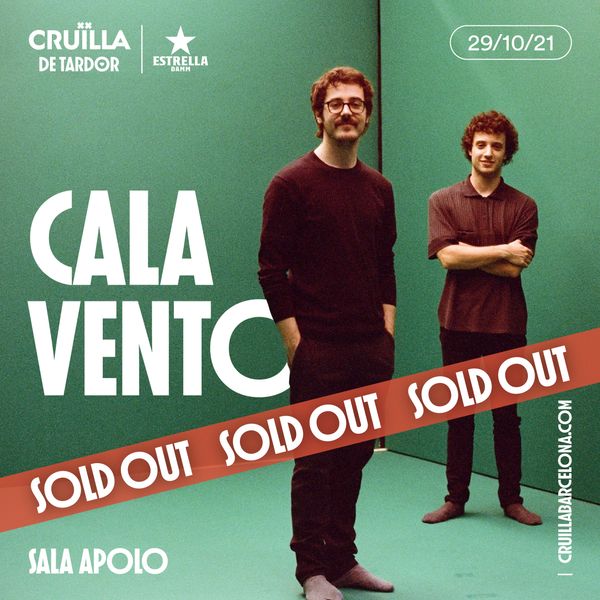 An era comes to an end. Balanceo (Montgrí, 2019) is the first adventure of Cala Vento with its own record label. An album that has received a lot of praise and is the culprit of many good things that have happened to Cala Vento in recent years. It wouldn’t feel right to move on to the next chapter without first sending off this album as it deserves.

Now, what is probably our favorite national rock duo lands at the Cruïlla Tardor to end an era and open a whole new one. It will be on October 29th at the Sala Apolo, and we will live it to the fullest.

Since they started composing together in 2014, Joan and Aleix have released thirty-eight songs in different formats (singles, LP’s, EP’s …). Their music has always been characterized by the immediacy, strength and emotional intensity of those who live passionately and are more affected than ever by the doubts of a generation without a future. However, Cala Vento have the ability to convey optimism and joy from a seemingly fatalistic position.

This could be a fairly accurate summary of Cala Vento‘s career but, surely, we’re not mentioning an essential part of the band. Joan and Aleix make and unmake, with no other pretensions than to be honest with themselves and take maximum care of their steps as a group. For this reason they decided to create Montgrí, their own record label, to be able to control all the editing and distribution processes of their music and, at the same time, take advantage of their small infrastructure as a platform to produce the works of other related musicians, such as Lagartija Nick or Los Manises.